Vocational skill is helping her to start new life

Samot (PP-3226) had been sold by her mother at her young age of 2 years to an old lady in Pursat province while her parents got divorced and remarried. She was forced herself to stop studying at grade 5 of primary school while she was 13 year sold in order to help her grandmother (a lady who bought her) selling cake in the village to support the family because the sons of her grandmother had very often insulted her while she made any mistake they hated her very much.

While she was 20 years old she had met her mother and she told her that she lived with her husband in Prey Veng province and she asked her to live with her family there. She decided to follow her without telling the grandmother because she was angry with her sons. She had lived there for a bout a month she had been lured and sold (supported by 2 middle men whose ages were about 30 years old) by her mother to a Karaoke parlor in Prey Veng. It was about 15 days later, she had escaped from that Karaoke and went to her grandmother at Pursat. Later on, she left to Phnom Penh in order to get a job as a cook for a Chinese company with support from someone whom she knew in her village. She worked there for about 6 months she had relationship with a man and lived together as partner. She and her partner moved to live in Pursat with the grandmother. She was 3 months pregnancy. One day, he had known that she used to work as Karaoke girl from his friends since then he had always insulted and made problem with her very often and finally he had run away without caring of her 3-months pregnancy. After 3 months of giving a birth of her child, she left to Phnom Penh again in order to look for job. She visited AFESIP’s clinic for health consultation and had received several counseling supports from the staffs she decided to take on vocational training in AFESIP.

She was referred to Tom Dy shelter in 2012 by village chief after she had visited and received several health check-up, consultation and counseling supports from clinic staffs. She had chosen sewing skills and trained very hard. She had completed her training successfully in 2014 and reintegrated into community with support of sewing business starting kit of $700. She is very happy with her business by utilizing the skills she was trained in from AFESIP . Her present condition is quite different from her past that she has now recovered and had a certain skills to do the job. “Now I come back to live with my grandmother; I feel happy because I hope I can earn some money from my sewing business” she said. Her grandmother showed her strong welcome and supported her. “Thank you so much for educating my granddaughter to be a seamstress and live a normal life like others” her grandmother said. 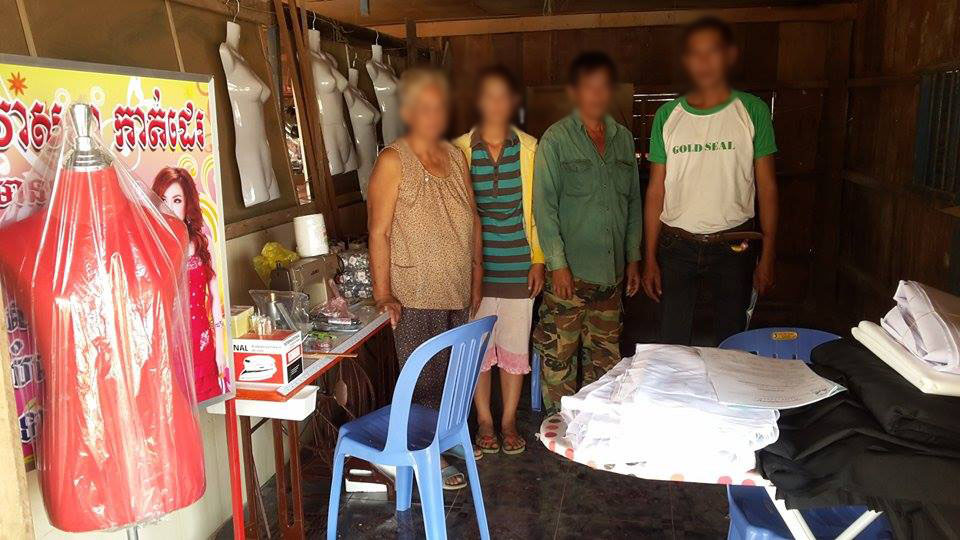 The support she has been receiving from AFESIP is not yet ended we continue follow-up her on her business progress, psychology, health and support her on a regular basis when needed.

This is one of the cases that many women and children, in Cambodia, are facing. The victim or high-risk women and children that AFESIP works with have had their basic human rights violated and have been subjected to some of the worst forms of exploitation and abuse, both physically and mentally. The vast majority comes from backgrounds of extreme poverty and many already have histories, which include domestic violence or rape before the event of trafficking took place. All of them are female and have struggled against gender-based discrimination most of their lives. Consequently, support, resources and opportunities available to them are extremely limited and socially, they are marginalised by their societies.

We would like to thank you very much to our supporter and donors, without your contribution and support we could not reach our goal. Your generosity is contributing to make a difference for many lives of women and children who are in need of special protection. We need your ongoing support at any way of your capacity to keep our programs operate. We cannot change the world but together we can make a better place and peace to free these women and children from abusive and vulnerable situation.