Justification letter from HE Phay Siphan 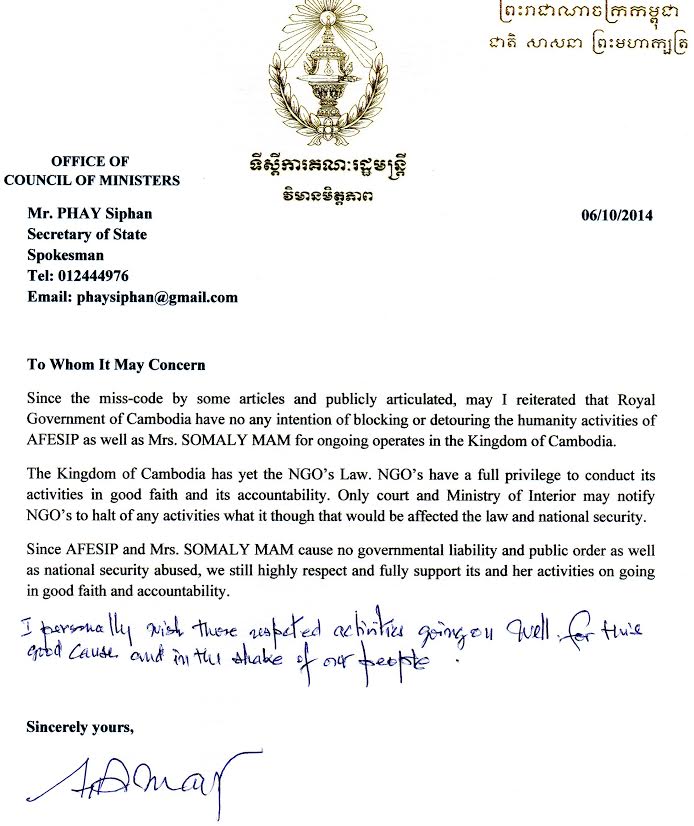 A QUESTION OF RESPONSIBILITY

I spent a year volunteering in Cambodia between 2007/8 and many months working at AFESIP, an NGO working with trafficked women and girls. I was impressed by the tireless work AFESIP carried out for young marginalised girls and women in Cambodia. I saw first-hand the difference the interventions from them made, not only to children and women but also to the wider family networks and the broader community.  An important strength of AFESIP was its grassroots nature, local knowledge and ability to work with women and girls across Cambodia.

I returned to the UK to embark upon an MSc International Development Studies and undertook field research into the reintegration opportunities for AFESIP's residents in Cambodia.  In my thesis in 2009, I observed that 'The strength and determination of AFESIP's founder, Somaly Mam, has been a determining factor for AFESIP’s survival and in raising the issue of trafficking nationally and internationally'. The global financial crisis in 2008 and a lack of government commitment to tackling the cause, led to a shortfall of funding for AFESIP’s core services. In an attempt to secure AFESIP's future funding and to enable these services to continue and expand, Mam aligned herself with some US supporters to set up the Somaly Mam Foundation (SMF). Whilst the establishment of SMF initially appeared to have beneficial effects such as increased funding and profile-raising of trafficking in Cambodia, this relationship could not be regarded as benign or apolitical. In my research of 2009 I suggested that 'The relationship of SMF to AFESIP must be considered within the context of the hegemonic relationship which can exist between the developed world to the developing and more specifically from the US to Cambodia. It can be argued that the increased funding opportunities the relationship with SMF enables also brings its own burdens in relation to power and decision-making which could have far reaching implications for AFESIP in the future. (Herd 2010)'

It is with a heavy heart that I have witnessed what has now unfolded between SMF and AFESIP. The relationship between these two organisations has evolved in a way that may not be surprising considering the unequal power dynamic that often dictates the direction of much development work. Following an investigation commissioned by SMF and the publication of an article by Newsweek in May 2014, Somaly Mam left SMF. This damning story featured across the international stage with extensive media coverage of her very public humiliation. I have met Somaly Mam on a number of occasions and have seen first hand the inspiration she has been to thousands of vulnerable young Khmer girls and women. I would suggest her very presence and motivational words have provided comfort and hope to those whose lives often felt hopeless.

SMF have openly admitted that they used a law firm to conduct a 3rd party investigation into allegations related to Somaly Mam. The question that springs to my mind is 'Why?' In a world where sexual exploitation, gender inequality and abject poverty remain prevalent, why would a charity allocate scarce resources to paying lawyers to investigate a woman who has devoted her life to improving the lives of thousands of children and young women? One might ask why they chose this option over allocating those same resources to investigating the traffickers in Cambodia. There appears a certain irony that the very people who strode into Cambodia approximately seven years ago vowing to do something to help 'save them' are now the very people who could potentially have brought Somaly Mam and possibly AFESIP to their knees.

When SMF first made their public statement on their website about Somaly Mam, they also clearly stated that they would continue to support AFESIP Cambodia. Gina Reiss-Wilchins, SMF Executive Director, stated 'We look forward to moving past these events and focusing all of our energies on this vital work, ensuring that the hundreds of women and girls that are currently being served in our grant partner AFESIP’s three centers for recovery and rehabilitation, receive the care that they so desperately need..' (May 2014). However, shortly after this pledge, they withdrew their funding to AFESIP without any notice. This action leaves over 150 women and girls within AFESIP shelters without any security for their future.; over 10,000 women and girls’ access to medical, legal and outreach services in jeopardy; over 100 staff potentially without employment and an organisation which has been at the forefront of counter-trafficking work in Cambodia for many years, without any sense of what the future might hold. Whilst I am not party to all the facts related to the demise of the relationship between SMF, Somaly Mam and AFESIP, what is most concerning is that contractual agreements can seemingly be broken with such ease. In an environment where the media and general public seem to   crave the 'victim' story, which can include the details of sexual and physical abuse, there is increasing pressure on NGOs and activists to provide these stories. It is vital that international donors and media consider the impact of such sensationalised approaches. There is a very real risk that such approaches lead to further exploitation.

Anyone who has spent any amount of time in Cambodia will know that gender inequality and poverty are rife. Rigidly held definitions, such as 'trafficking' or 'orphans' are not always as clear cut as people would like .If we visited the care system of any developed country throughout the world we would find that a large number of children in state care are not orphans. They are placed in orphanages/care homes because their parents are unable to provide for them. The issues and arguments therefore of their 'true' orphan status is nebulous; their plight of destitution, vulnerability and need however, is not. It is this perspective and principal that should be applied to the plight, welfare and future of AFESIP's residents.

Whilst SMF have become embroiled in their very public argument about the validity of Somaly Mam's story, the women and girls in AFESIP's care seem to have been forgotten. The consequences of SMF's abrupt withdrawal of funds from AFESIP could have catastrophic consequences. This raises the question as to what level of responsibility and accountability international donor agencies, such as SMF, should have, and what happens when it all goes wrong? Shouldn't donors shoulder some of the responsibility, rather than try to extricate themselves if things become difficult or blurred. Another very concerning aspect of this story is that when a key donor decides to withdraw their funding from a grassroots organisation, they have the funds, resources and expertise to present their position and yet this position is often denied to the local organisation who may have no such resources, thus leaving a very one sided view. It is vital that grassroots organisations are given a voice and that a balanced picture can then be seen. A number of points and objections have been raised by AFESIP to SMF, questioning the decision and manner by which their funding was withdrawn. To date these points and objections have remained unanswered. .

An organisation such as SMF, based in the US, can seemingly drop an organisation such as AFESIP and move on to ply their trade elsewhere. Yet where is the accountability for SMF? Should they be allowed to rebrand and move onto 'supporting' another charity in the developing world without redress? Should their actions go unchecked?' What happens to the funds raised for the work of AFESIP or in the name of Somaly Mam?

Somaly Mam has regained enough strength to start fighting back with her first interview and published article since this crisis began www.marieclaire.com/world-reports/inspirational-women/somalys-story?click=list1  Hopefully this will mark a turning point for the future of Somaly Mam and AFESIP. In the meantime however, AFESIP's future remains uncertain as they remain in a funding crisis, with many fundamental questions left unanswered.

On August 25, 2014, the Investigation team of AFESIP received 3 victims, 2 of them are under age, one is 16 years old and the other is 17 years old while adult one  another is 20 years old, whom had been victims of sexual trafficking to receive safe accommodation in its rehabilitation shelter located in Phnom Penh. Currently, the Investigation team is working underground with competency authorities in order to rescue the remaining victims in the same brothel where the above 3 victims had been jailed to be sexual slaves for almost a year.

Let’s us keep our fingers crossed for the success of this risky-yet-meaningful mission!

Stay tuned for the next updates.

Six residents are brought from Phnom Penh Tomdy and Siem Reap Centers to train on commercial kitchen, a range of western and international food & beverages, serving customers, taking orders and delivering meals to tables…The on-the-job training is offered by Connecting Hands, an Australian based not for profit charity, having committed to raising awareness about human trafficking and slavery. 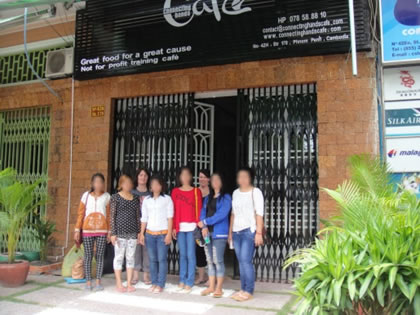 Following the information offered by AFESIP Cambodia’s management that Somaly Mam Foundation, whose GINA REISS is presently the Executive Director of SMF, abruptly terminated the entire funding for AFESIP Cambodia, AFESIP Cambodia’s staff have felt so doubtful and deeply shocked with this decision for this triggers the following negative impacts on:

Based on the above mentioned, staff of AFESIP Cambodia would like to condemn for their irresponsible and inhuman decision to cut down fund managed by SMF management and Board of Directors in the United States and would like Ms. Gina Reiss to reconsider over the mistaken decision and request her to provide various reasons against the cutting of fund and also reconsider the bad consequences over all victims and AFESIP operations as a whole.

Also we would like to take this opportunity to appeal to national and international public to consider and find justice for AFESIP Cambodia, victims and AFESIP’s staff.

In the end, we would like to suggest all donors who used to donate directly to SMF to reconsider funding and request their emergency aid to AFESIP Cambodia.

On behalf of AFESIP Cambodia staff